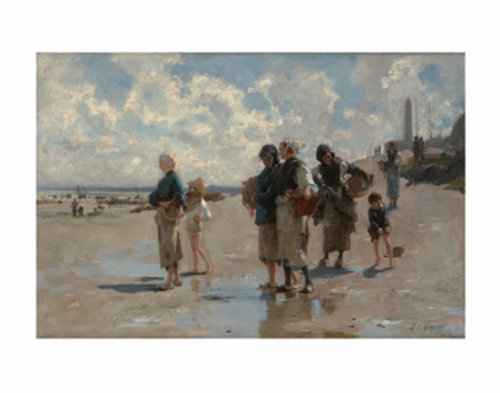 Fishing for Oysters at Cancale, 1878
John Singer Sargent, American, 1856–1925
Museum of Fine Arts, Boston
Gift of Miss Mary Appleton, 1935
Accession number: 35.708 In 1877 the twenty-one year old Sargent spent the summer in Cancale on the coast of Brittany sketching fisherfolk. He sent his first completed painting, "Fishing for Oysters at Cancale," a finished sketch, to New York for display at the newly-formed, avant garde Society of American Artists. Sargent submitted the second painting, "Oyster Gatherers of Cancale" (Corcoran Gallery of Art, Washington, D.C.), a larger, more finished version of the same subject, to the 1878 Paris Salon, where it was awarded an Honorable Mention. Critics praised "Fishing for Oysters at Cancale," the first Sargent painting to be exhibited in America, for its silvery hue and almost palpable marine atmosphere. Samuel Colman, a landscape painter twenty-fours years Sargent's senior, bought it for $200 as a standard to emulate. Sargent's choice of subject was not revolutionary - a similar scene of oyster harvesters had previously won a medal at the Salon. However, his ability to paint the reflections in the tidal pools and the light sparkling on the figures and clouds dazzled viewers, clearly demonstrating that his talents extended beyond portraiture. This text was adapted from an entry by Janet Comey in Erica Hirshler, "Impressionism Abroad: Boston and French Painting," exhibition catalogue, Royal Academy of Arts, 2005. Matted to a standard 11" x 14" format (image size may vary).

Prendergast Sunlight on the Piazzetta