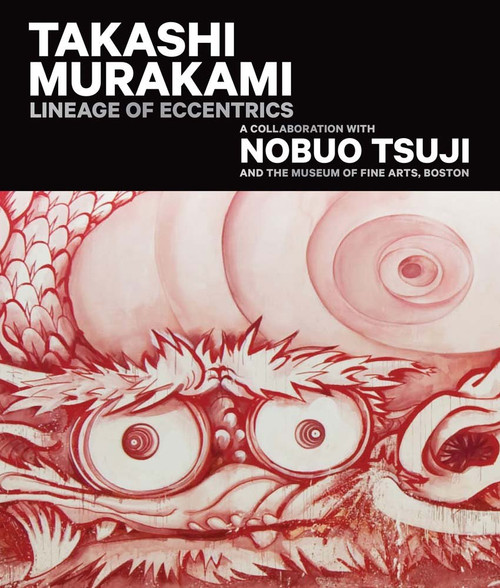 The lineage of the “superflat”: Murakami's vision of the Japanese aesthetic Takashi Murakami’s irreverent, pop culture–infused art has made him one of the most recognized Japanese artists today. His bright, contemporary boisterousness, however, belies his deep scholarship and engagement with traditional Japanese art. Takashi Murakami: Lineage of Eccentrics presents key examples of Murakami’s work alongside a rich selection of Japanese masterpieces spanning several centuries and arranged here according to concepts laid out by his mentor and foil, leading Japanese art historian Nobuo Tsuji. These include works by Kawanabe Kyosai, Soga Shohaku, Kano Eino, Ito Jakuchu and Hishikawa Moronobu. Beautifully illustrated with Tsuji’s selections from the peerless Japanese art collection at the Museum of Fine Arts, Boston, as well as some of the artist’s best-known works of painting and sculpture, the combination of old and new in this groundbreaking volume enriches our understanding of each, and ultimately shows us how contemporary art can be seen as part of a continuum or lineage. Takashi Murakami (born 1962) is an internationally acclaimed artist and the founder and president of Kaikai Kiki, an art production and management company based in Tokyo with a studio in New York City. He was the first person to earn a PhD in Nihonga―a form of Japanese paintings created using traditional materials and techniques―at the Tokyo National University of Fine Arts and Music. Over the last two decades, he has presented numerous exhibitions around the world, from Versailles to Qatar. His first major solo exhibition at a US museum was held in 2 1 at the Museum of Fine Arts, Boston, titled Takashi Murakami: Made in Japan. Murakami is well known for his corporate branding projects with Louis Vuitton, VANS, shu uemura, Issey Miyake, Lucien Pellat-Finet, Roppongi Hills and ComplexCon, as well as collaborations with musicians such as Kanye West and Pharrell Williams. In 2 8, he was selected as one of TIME magazine’s “1 Most Influential People.” More recently, he has been working on film and animation productions, releasing his first live-action film, Jellyfish Eyes, in 2 13 and an animated television series, 6HP (Six Hearts Princess), in 2 17. Hardcover: 184 pages
Publisher: MFA Publications (April 24, 2 18)
Language: English
ISBN-1 : 878468498
ISBN-13: 978- 878468492
Product Dimensions: 8.8 x .8 x 1 .2 inches
×

Writing the Future: Basquiat and the Hip-Hop Generation Exhibition Catalogue