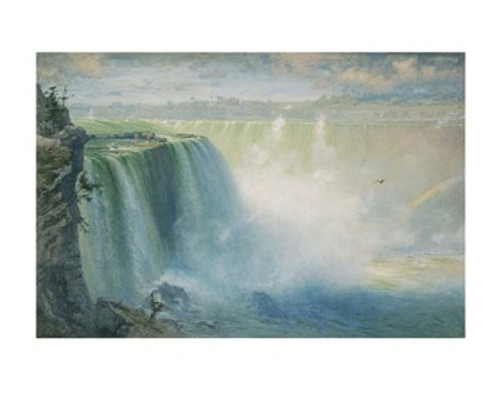 Blue Niagara, 1884
George Inness, American, 1825–1894
Museum of Fine Arts, Boston
Charles H. Bayley Picture and Painting Fund, 1982
Accession number: 1982.209 During the nineteenth century, Niagara Falls was the most famous natural wonder in America, and it attracted tourists by the thousands. Artists had also always been drawn to the falls, attempting to capture the sublime spectacle of the site. Inness became so inspired when he arrived at Niagara Falls in 1881 that he reportedly rushed to the studio of an old friend in Buffalo and demanded to borrow painting supplies in order to get his first impressions recorded immediately. Eventually Inness completed nine known paintings in oil and watercolor of Niagara Falls including the Museum's painting, which is the largest. Matted to a standard 11" x 14" format (image size may vary).
×